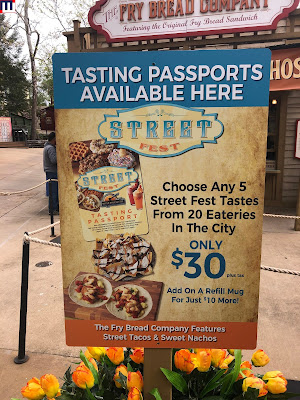 A major part of the new Street Fest is the food offerings.  SDC has created Tasting Passports to help guests maximize their food spending money and be able to test out these new offerings 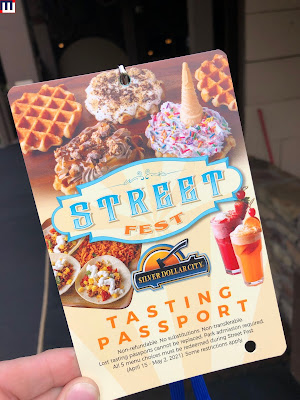 The Passport costs $30 + tax for park guests.  Season passholders get 10% off and Gold passholders get 20 % the price.  Once purchased you can get 5 tastings from the list of options on the back.  We are going to show you our selections from today 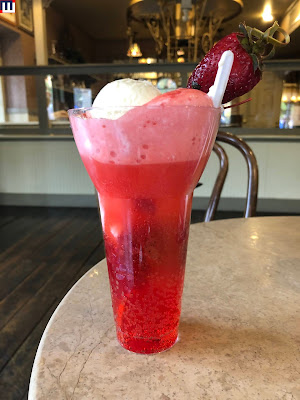 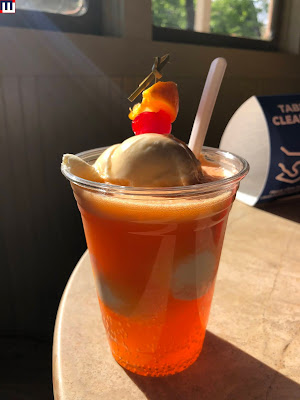 FANTA FLOAT (ORANGE)
Hannah's Ice Cream Parlor
Thoughts: The ride mixture of ice cream and soda.  There is orange garnish at the bottom of the cup and the large orange skewer accent.  It is a good, but we liked the strawberry version better
RECOMMEND 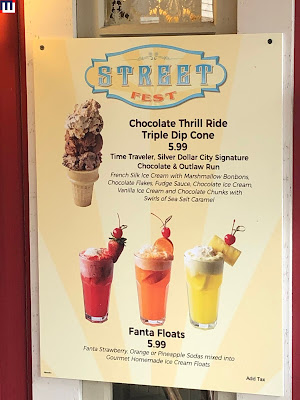 Also available here is the Triple Dip Cone and two other flavors of floats.  You can see prices and details listed in this photo 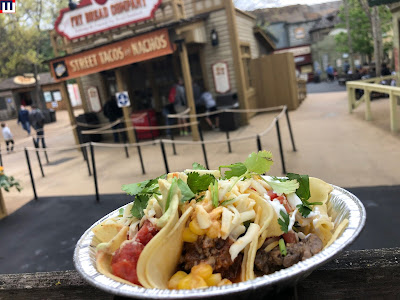 STREET TACOS
The Bread Company
Thoughts: I was able to get a sampler of all three types offered.  Shrimp - There were only 2 shrimp in the taco and the rest of the ingredients didn't do much for me.  Sweet & Spicy Beef - it had some nice flavoring to it. Carne Asada - was my favorite of the three, actually had some meat in it
RECOMMEND CARNE ASADA 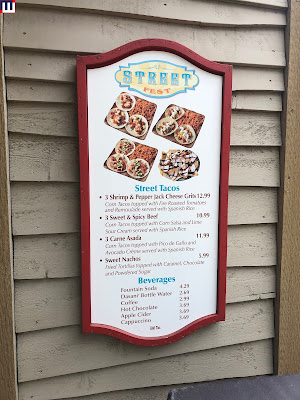 Here is is other offerings at the Fry Bread Company including what each of the three taco styles have in them.  They also offer desert nachos but we did not try them on this visit 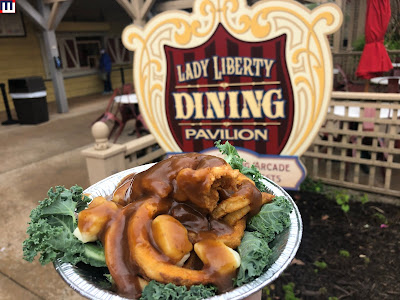 CHICKEN BOWL (POUTINE)
Lady Liberty Dining Pavilion
Thoughts: The combination of food elements pays homage to the Canadian dish in a purely American way.  It has great flavor, though we found the gravy was a little salty.  The cheese curds were very yummy.  Chicken tenders were perfectly done.  The fries were crispy to perfection.  Didn't see the point of the kale leaf.
HIGHLY RECOMMEND 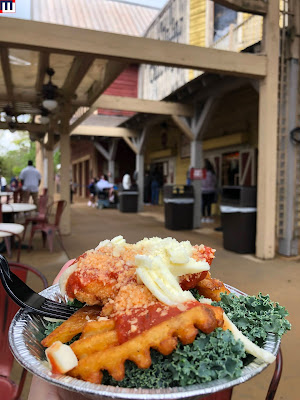 CHICKEN BOWL (PARMESAN)
Lady Liberty Dining Pavilion
Thoughts: The flavoring of the parmesan and chicken were very yummy.  Chicken tenders were perfectly done.  The fries were crispy to perfection.  Didn't see the point of the kale leaf.
HIGHLY RECOMMEND 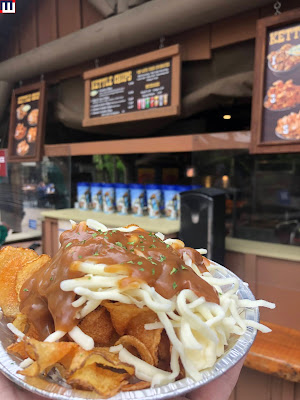 POUTINE CHIPS
Chester's Kettle Chips
Thoughts: The combination of food elements pays homage to the Canadian dish in a purely American way.  It has great flavor, though we found the gravy was a little salty.  The cheese curds were very yummy.  The chips were great like normal
RECOMMEND 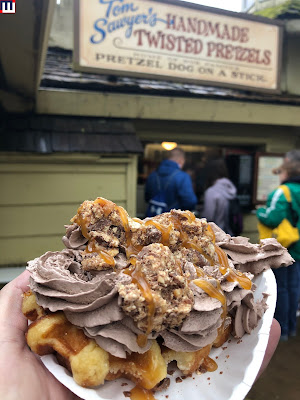 BELGIAN WAFFLE (SNICKERS)
Tom Sawyers
Thoughts: This thing was delicious but really really rich.  Even with the sugar rush I would get another in a heartbeat.  The waffle is covered in a chocolate mousse and then Snickers chunks were put on top with a caramel drizzle.
HIGHLY RECOMMEND 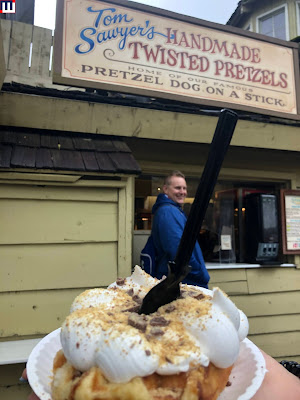 BELGIAN WAFFLE (S'MORES)
Tom Sawyers
Thoughts: Like the Snickers version, this thing was also delicious but really really rich. The big difference with this one is that it had marshmallow fluff and then graham cracker and chocolate put on top of it.  Very yummy
HIGHLY RECOMMEND 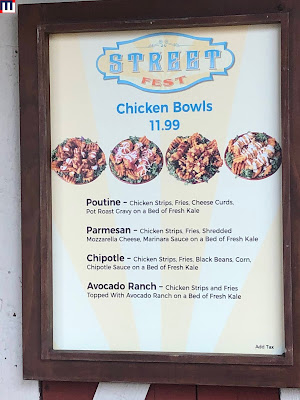 There are 4 different varieties to choose from.  We'll probably get a different one next time 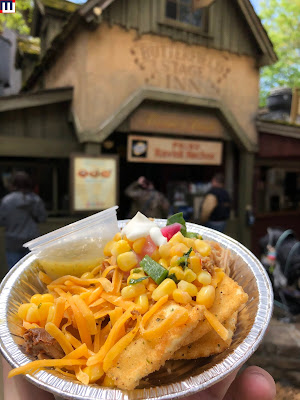 FRIED RAVIOLI NACHOS (CARNITAS)
Flossie's Fried Fancies
Thoughts: I never would have considered fusing these two flavors together but they really work.  The Carnitas were great.  The ravoli probably should have been toasted instead of fried, but it works.  Great flavoring combination.
HIGHLY RECOMMEND CARNITAS 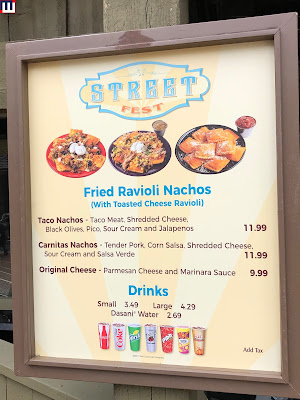 If you are less adventurous you can get the Ravioli plain.  There is also a Taco option.  Not sure how that would taste.  I'm afraid the taco meat would make everything runny 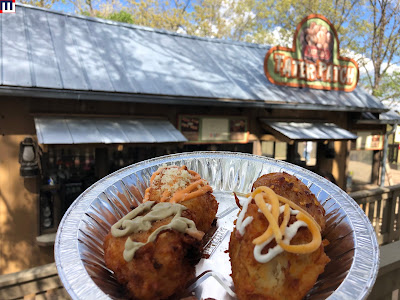 TATER TUMBLERS
Hatfield's Tater Patch
Thoughts: We decided to get one of each type.  Supposedly they are Sweet & Spicy, Garlic Parmesan & Red Pepper, Chorizo and Loaded Potato.  Other than the Loaded Potato they are basically the same with a different sauce on top.  So if you want to check these out go with the Loaded Potato.  Have to admit I was not overly impressed with these.  Also pictured is a full serving, the tasting card will get you only two.
PASS NEXT TIME 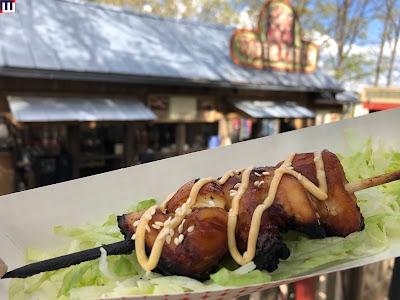 CHICKEN SKEWER
Hatfield's Tater Patch
Thoughts: They offer Buffalo, BBQ or Teriyaki.  For a tasting you only get one skewer.  I chose Teriyaki and honestly this was probably the worst food choice of the day.  The chicken was burnt on one side to where it was inedible and had to be removed in order to actually eat any of the skewer.  It had no real flavoring to it other than chicken.  Very disappointing.
PASS NEXT TIME 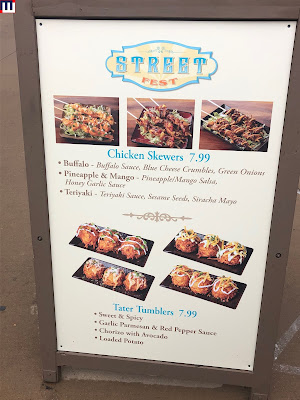 If you get the full sized versions, you get 3 skewers or 4 Tater Tumblers.  You are allowed to mix and match.  We will pass on this one next time.  There are much better options 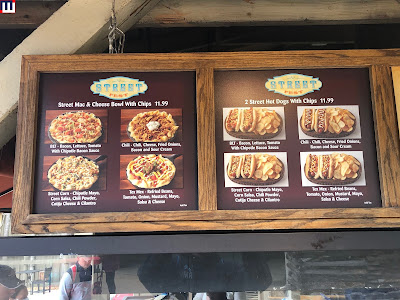