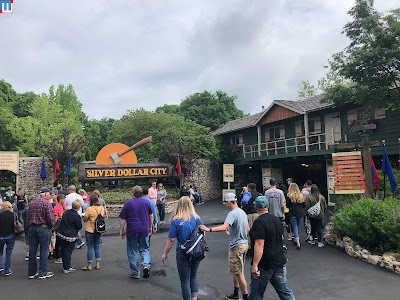 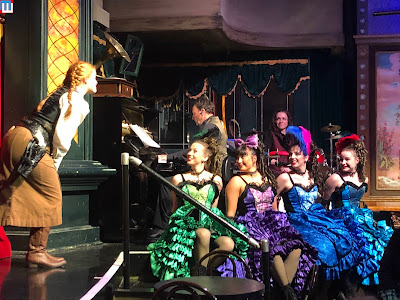 In the Saloon, this year's show, Sagebrush Sadie's Wild West Adventure is playing 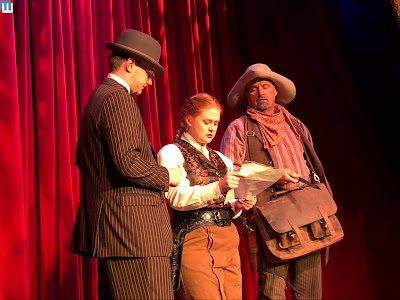 One thing we noticed is that there are only 2 returning members from last year's cast. 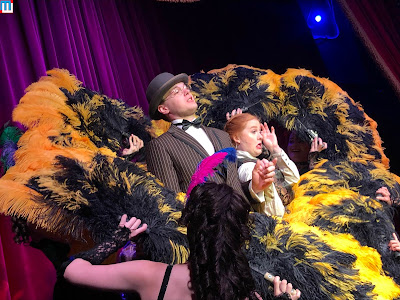 The show features mostly new numbers, including "All He Cares About is Love" from Chicago and "All I Do the Whole Night Through" from Singing in the Rain. 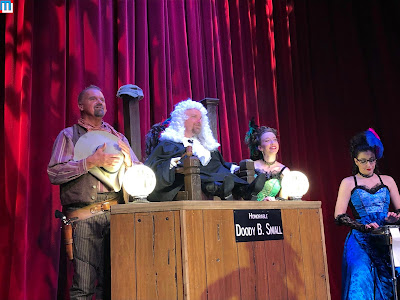 The main part of the show features a Night Court themed session with the Honorable Doody B. Small 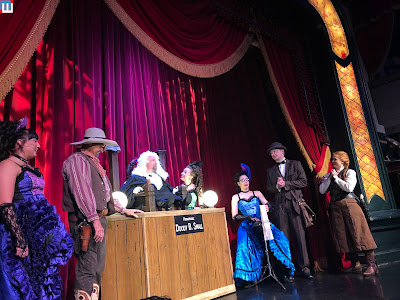 The show is quite enjoyable and we figure it will get tighter in the acting as the season progresses. 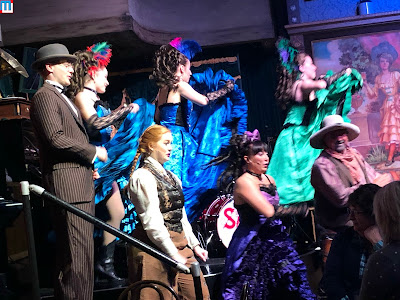 The two returning members can be seen here in the lower right of the photo.  Miss Tillie (purple dress) and Charlie. 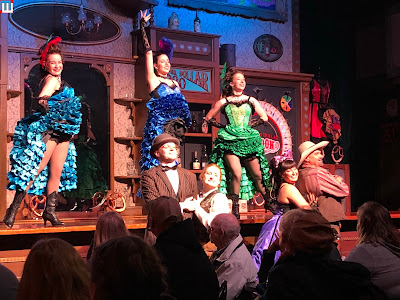 Definitely recommend going to watch this show sometime this season. 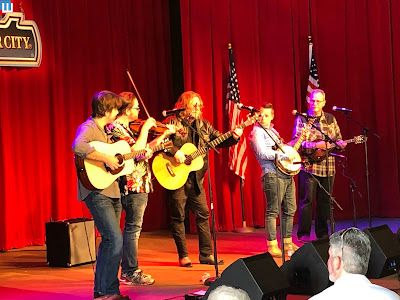 Ray Cardwell & the Tennessee Moon performing in the Dockside Theatre 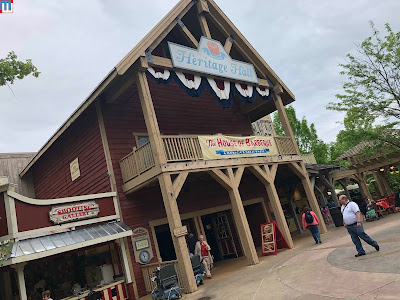 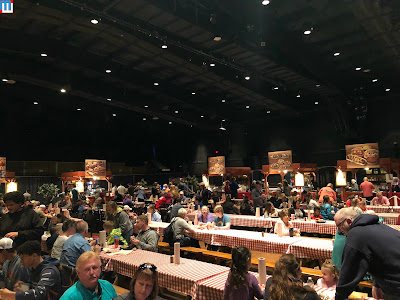 Like normal, there are many different dining booths you can purchase from around the perimeter of the room, with tables in the middle. 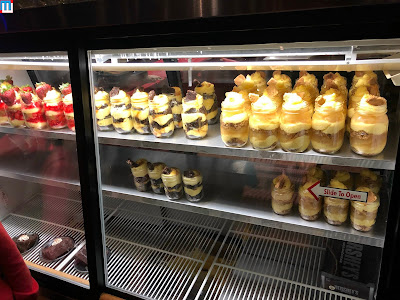 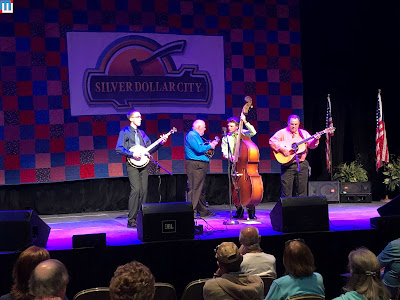 Bull Harmon & Bull's Eye was performing on the stage in Red Gold. 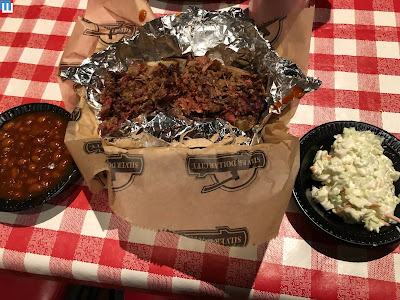 A couple of the meals that we got here include this loaded baked potato with brisket.  It came with baked beans and coleslaw (I asked for mine on the side, but it usually comes on top of the brisket on the potato) 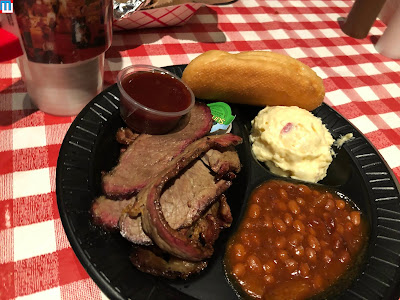 You can also get a platter which comes with brisket strips, baked beans, potato salad and a breadstick roll. 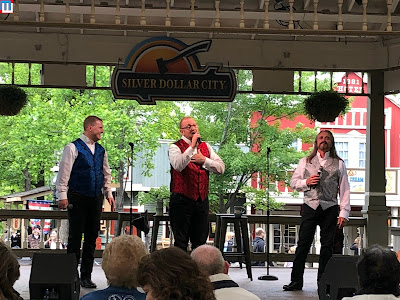 The Sons of the Silver Dollar have returned for a new season and are featuring a new member from Joplin.  He's the one in the blue.  They will be performing at different venues depending on the day during the festival. 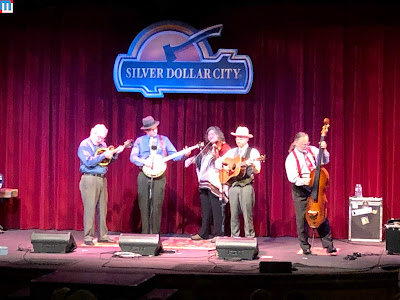 In the Riverfront Playhouse, Monroe Crossing was performing. 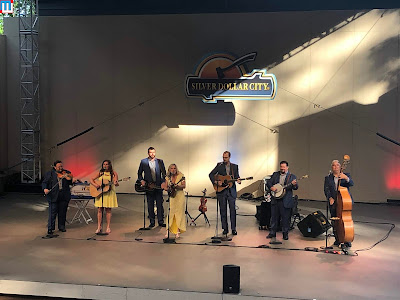 The big concert tonight in Echo Hollow featured Ronda Vincent and the Rage. 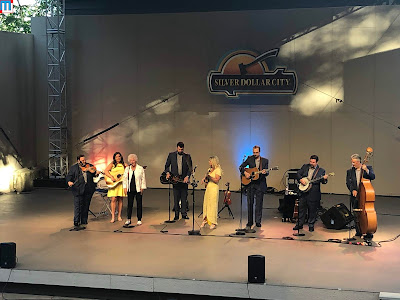 As a special surprise, Ronda's mother came up and sang a couple of songs with the Rage.  She was there promoting their families' Bluegrass Festival later this summer in Greentop, MO, where Ronda is originally from. 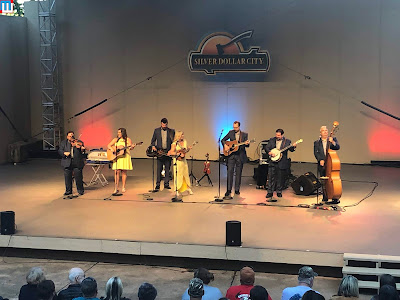 As normal, Ronda Vincent and the Rage put on an amazing show.  There's no doubt why she is considered the Queen of Bluegrass. 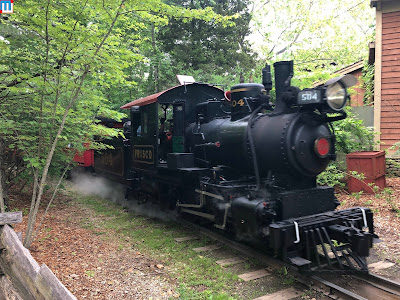 Make sure you get down to the 'City during this event before the Summer-time rush.  This is always one of our favorite times of the year because it truly gets back to the roots of the park.
Labels: 2019 Trip Reports, SDC - Bluegrass & BBQ, Silver Dollar City
Newer Post Older Post Home