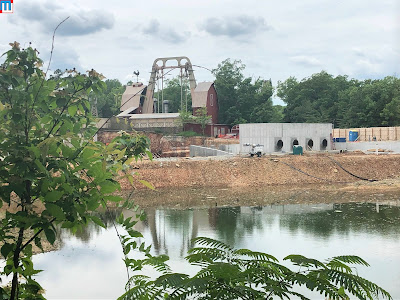 Time for another update on Mystic River Falls.  We are going to start today with the pump house. That is the building there on the right with the 4 big round openings. 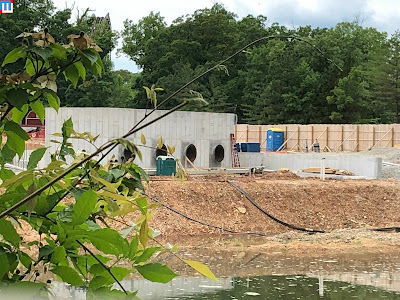 It is really hard to get a good idea of just how big these openings are from so far away.  Use the porta-john for a reference to get an idea of the scale. 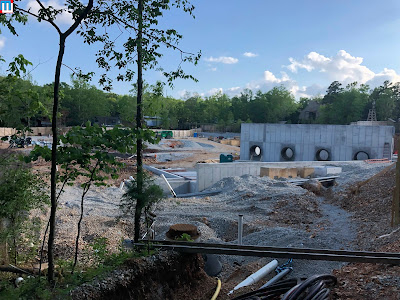 From the backside you can see that the building just continues to grow. 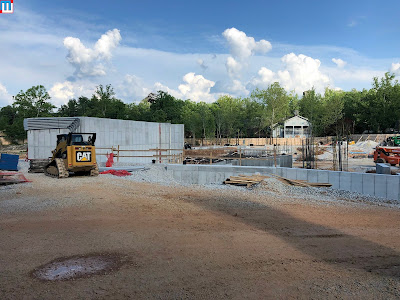 Still back behind, but now on the other side, you can see on that wall that they have installed some major electric components. 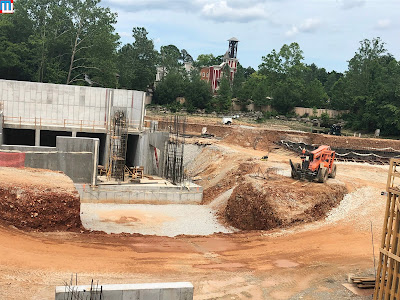 Still looking at the same building.  You can get an idea of just how deep the building is using the orange loader as a way to measure scale. 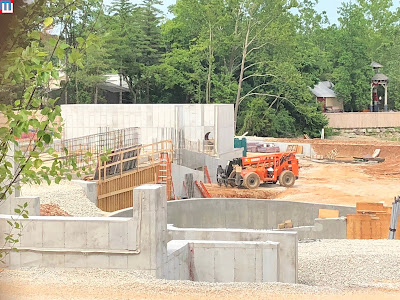 Still looking at that same building, it appears that they are getting ready to build another wall as rebar is already in place.  It also looks like there is a new trough section and maybe concrete foundations for a conveyor lift. 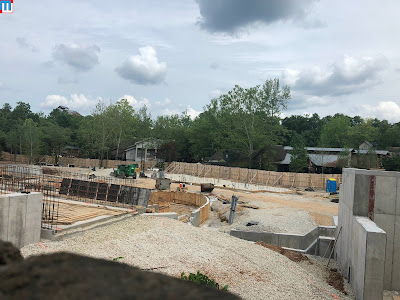 Same general area that we've been looking at.  You can see the trough there in the middle and then that concrete foundation that might be for a conveyor lift on the right. 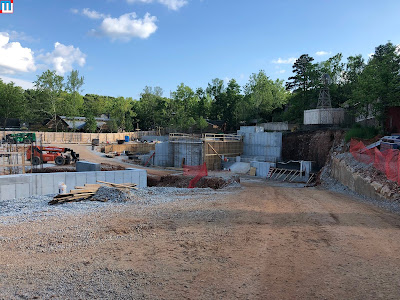 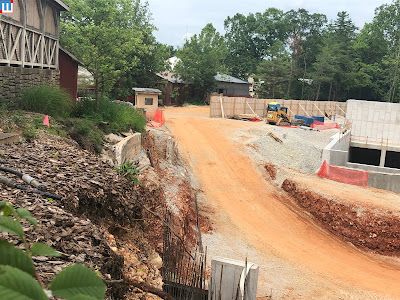 Here's a different view of that carving of the hill below the Swing.  The pump house is the structure you see there on the right. 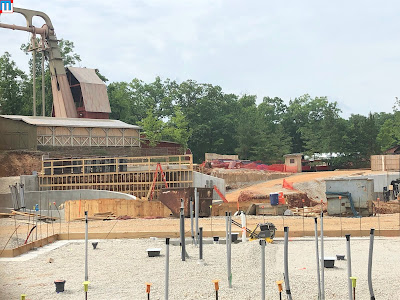 To get a better idea of how wide the structure is there by the Swing, here's a look across from where the Ribhouse will be located. 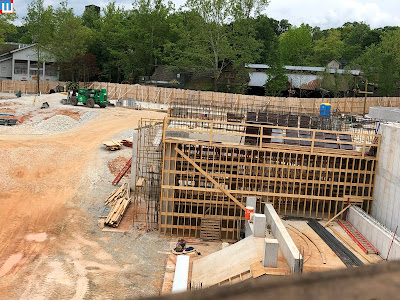 So back to the view from the Swing of that structure.  You'll notice something that might be a trough there on the lower right.  This could be where that elevator lift might hook up with the ride. 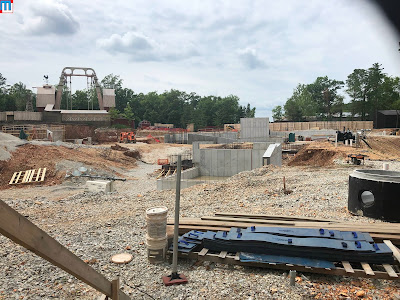 Moving on, there's some additional mysterious new cement structures in the construction lot. 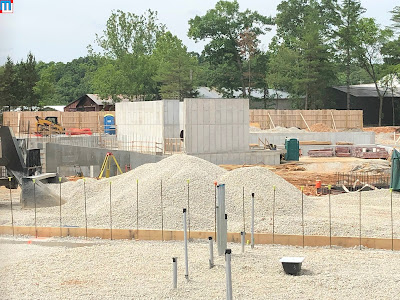 For instance, these new cement walls have popped up in the middle of the entire area. 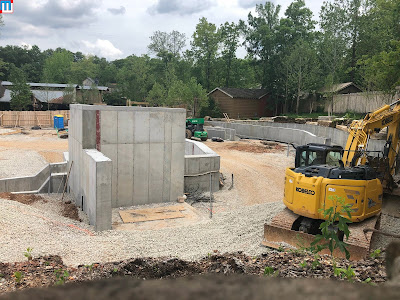 You can see they aren't far from the completed trough sections. 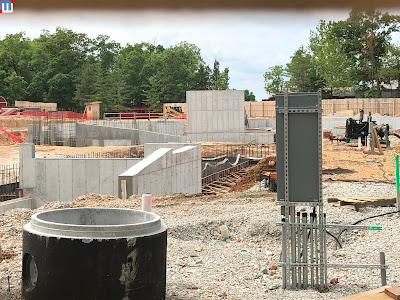 So it'll be interesting to see what these walls grow into over the next few weeks. 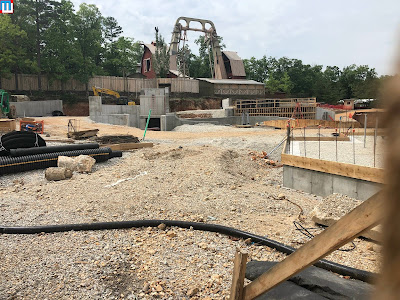 One last photo of that area.  You can see the foundation for Ribhouse has started to be laid there on the right. 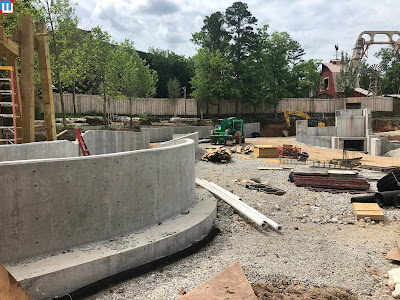 Now let's move on to the completed trough section, which has seen some attention since our last update, in the way of landscaping and thematic elements. 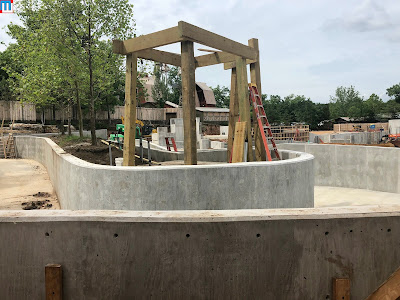 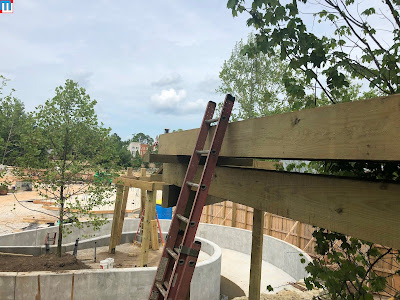 It appears that it will connect soon to the sluice that just stopped at the new dining patio across from Crossroads Pizza. 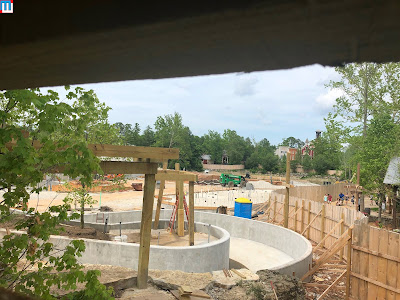 Here you can get a better idea of what is going on with the sluices. 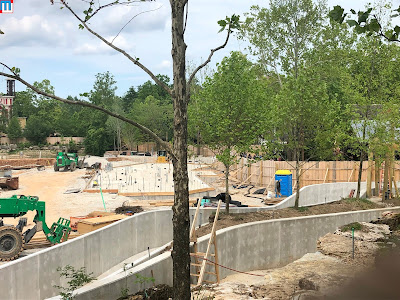 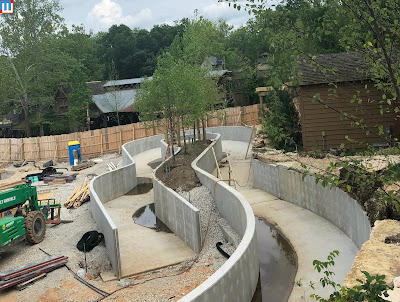 Here's a new vantage point of the completed trough area and landscaping going in.  Honestly this makes us extremely happy to see new trees being planted in this area. 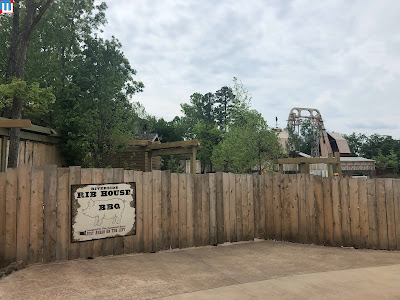 One last look at the sluices from outside the construction area.  It is great to see the tradition of water sluices in this area will continue with the new Riverfront.