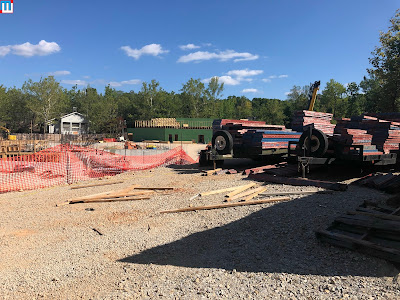 We're going to start this update from the train.  At the first access gate near the Giant Barn Swing you can look in and see two trailers full of cement forming flats. 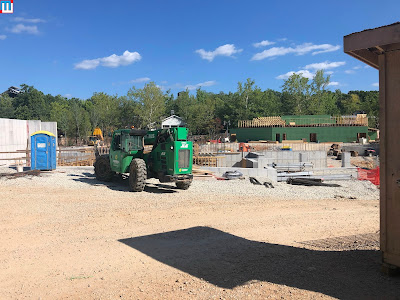 Looking across the construction area, you can see the large green building that will house the new Ribhouse.  You can also see a lot of cement walls. 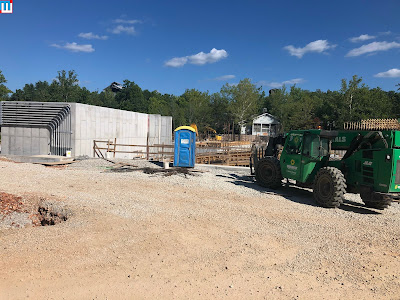 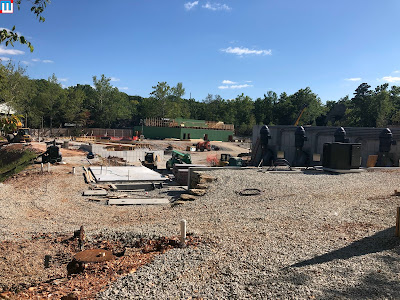 4 massive pump engines have been installed on this side of the pump hose. 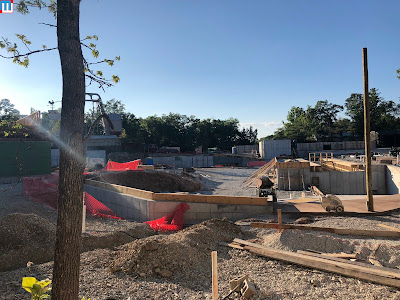 Now on the park side of the construction area, closest to the Playhouse Restrooms, you can see on the right what appears to be the load station for the ride. 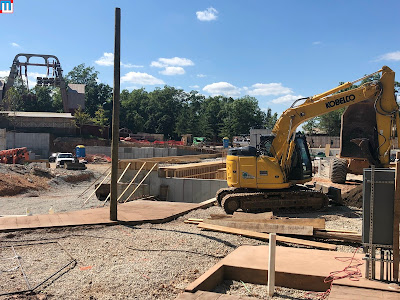 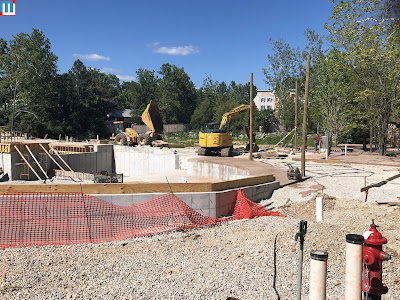 The new dining patio appears to be where the exit from the ride will be.  If that is the case, that'll be a great waiting area for those not riding. 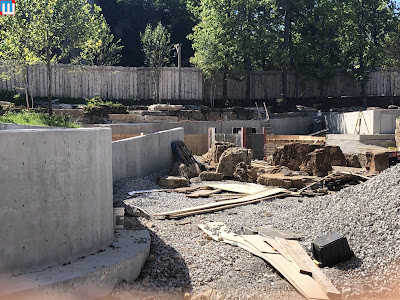 Moving on, we are now right across from the Dockside Theatre.  You can see that more stone has been brought in for thematic purposes.  Also look at how the new trees are growing in already 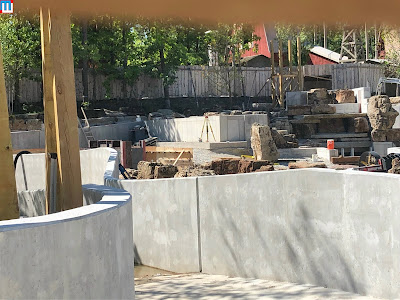 A lot of twisted troughs here.  You can see a new structure has sprung up near the fence.  This might be a new lookout tower. 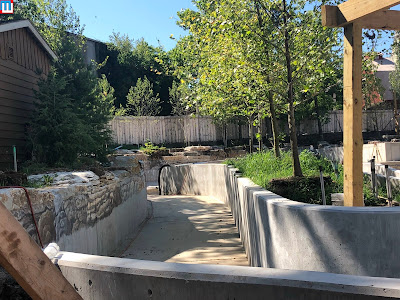 I found it interesting how they have applied a rock design to the trough here.  I don't know if it was hand painted or a graphic, but it really makes the cement trough look better. 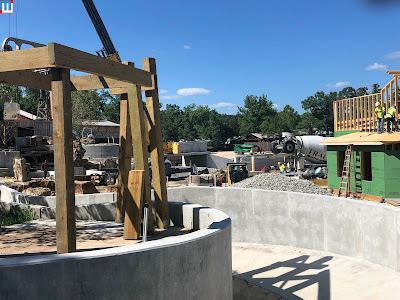 Looking from the area right next to the Crossroads Pizza deck.  You can see the "bridge trough" in the distance.  There's a closer look coming later in this update. 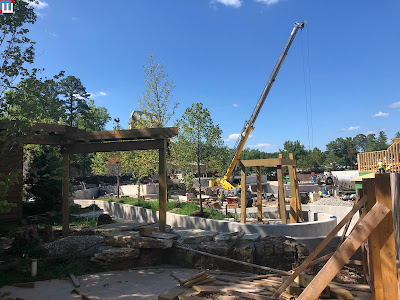 It's promising how the thematic elements already look.  They've added more rock here and I like how the island is already greening up with weeds 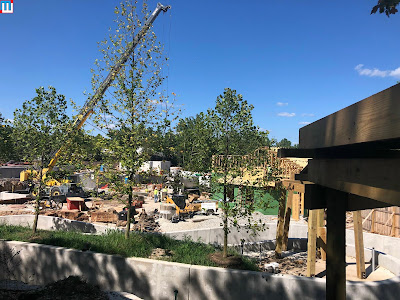 Looking from the Crossroads Pizza Deck near the Restrooms you can see just how green that island is already.  You can also start to get an idea of how Ribhouse will interact with the attraction. 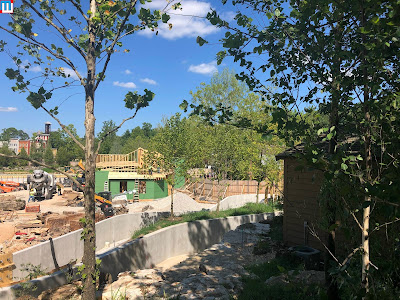 From the bridge to Wilson's Farm you can see the progress being made in the area where the first trough pieces were formed for the ride. 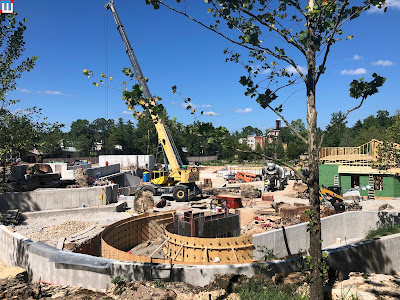 Panning left you can see that a new curved section is being formed.  The "bridge trough" can be seen in the distance. 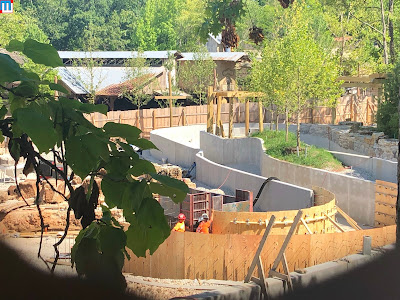 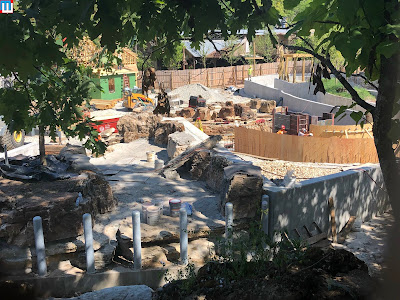 I found this area to be interesting.  It appears that we will have a water feature here that will interact with the trough.  There are poles where the water will enter the trough. 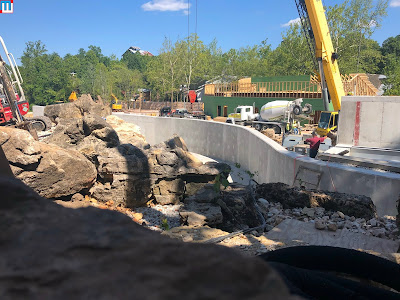 Lots of new rock that is waiting to be placed 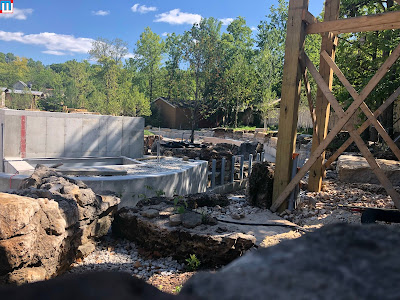 The next views are from in Wilson's Farm near the water fountain windmill. Here's another look at that new water feature area.  You can also see the feet of the new structure that appears to be a new lookout tower for the ride. 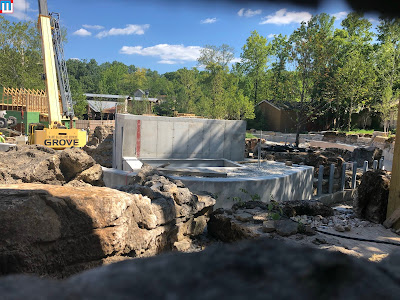 I am guessing this cement structure in the middle will be another pump that helps power this area of the ride. 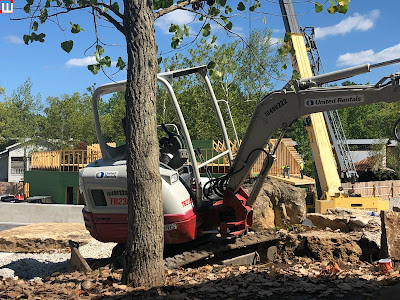 This appears to be the piece of machinery that is helping move in the new rock thematic pieces. 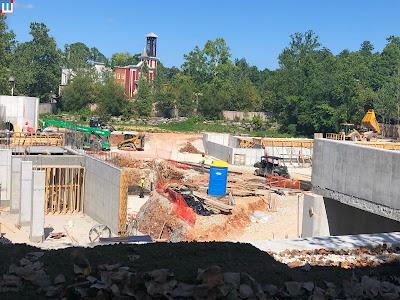 From the Giant Barn Swing queue, you can see the bridge and into the pump house 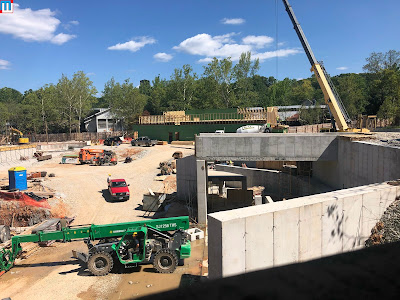 Here's the best view we could get of the bridge.  So there's trough over it and trough under it.  We are guessing that the large slide falls will be in here somewhere.  However it probably won't be installed until after the announcement. 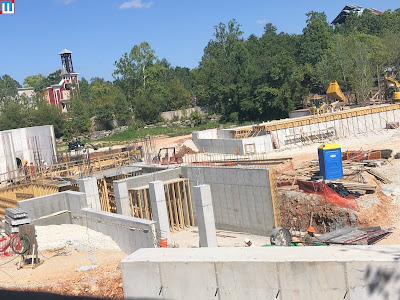 One last look from the Giant Barn Swing queue.  You can see the pump house and the load building.  I don't know about you guys, but I know we severely underestimated how big this ride was going to be.  It is going to completely dwarf what the Lost River was.